Taking place on planet Primus, alliances have to either use autonomous code or a camera to navigate through the 15-second sandstorm, where teams cannot see the field. During the teleoperated period, teams must fill their cargo ship and rocket with cargo and hatch plates to receive points and a possible ranking point. The end game consists of a 3-level climb, where there is an opportunity to earn an additional ranking point.

There are two scoring elements in Destination: Deep Space; hatch covers and cargo. Hatch covers are 19 in. (~48 cm) diameter polycarbonate toroids and cargo is represented by orange 13 in. (~33 cm) playground balls.

For the 2019 season, the sandstorm period is the first 15 seconds of the match and replaces the autonomous period, which had been used in many previous FRC games. Robots start the match at their respective hab platforms, fully supported by hab platform-level one or two. During the period, robots act solely on pre-programmed instructions, therefore acting autonomously, or under control of their drivers with the optional aid of a vision system mounted on the robot. Robots can earn points in a variety of ways. For each robot that fully crosses the hab line during the sandstorm period, the alliance earns three points if the robot started on hab platform-level one and six points if the robot started on level two. Robots are also able to earn points for scoring hatch panels and cargo on their alliance’s rockets and cargo ship. As these actions carry the same point value as if they occurred in the teleoperated period, they will be further discussed in that section.

After the sandstorm period ends, the teleoperated period begins, which lasts for 135 seconds. Drivers control their robot from their Driver Station and human players continue to deliver game pieces to the robots. During this period, as in autonomous, every hatch panel scored on a rocket or cargo ship will earn two points for the alliance. Additionally, scoring cargo into a rocket or cargo ship will earn three points for the alliance. Hatch Panels must be scored before cargo unless there are Null Hatch Panels installed on the bay.

Smiles all around! Continuing to push through build season to build the best bot ever 😤🤖
Build Season Week 3 🐓The Chicken Bot Pie is cooking something good for competition
Is #ChargedUp ! ⚡️🐔 Kicking off our season in the Loft
Chicken Bot Pie welcomed FIRST mentor @yojishimizu who led us in a core values workshop. Thank you!
Had a great time at the Minne Mini Regional this weekend! We got to train our new drivers and give our rookies a taste of the competition experience. 🐔🤖thank you to @kingtec2169 for hosting!!
Chicken Bot Pie begins team building for the 2022-2023 season 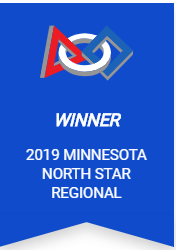